Okay, this is my second installment of "Internet Scams". I'm thinking this might be a regular topic around here, on The Looking Glass. We'll see. Regardless, I wanted to bring to light another possible website trying to scam unsuspecting people. In this case, new or aspiring writers. What better group of people to prey on than someone with a dream, right?

But before we get into why I hold reservations about this website known as "Absolute Write" and why I suspect them to be a scam, allow me to tell you a little story. I got to thinking that someone out there might be asking themselves, "How would Carroll know what a scam is? What makes him such an expert?" And to that I would say, "Very good question."

You see, I have an older brother, and he is a natural born con man. When I was a teenager, I looked up to him. I thought he was the cats meow. Cool, sophisticated, and everybody seemed to love the guy. He just has a way with people. It's hard to dislike him. And during my teen years, I got to hang out with him from time to time. He would let me work for him during the summers and such to make a few extra dollars. I got to hang out at his place all the time. This meant, I got to watch him in action as he would often scam people left and right. He could sell you a rock for a dollar and have you thinking you just got a great deal. You go home and show your spouse and she rips you a new one. You get upset, and go back to face off with my brother and to get your dollar back, but five minutes into your argument, he turns around and sells you another rock for twice the price. You're happy with your purchase. You get home and your spouse rips you again. Then you take one of the rocks and crack your spouse upside the head and smile. "He was right, I did need to buy these rocks!"

That's my brother. He will talk you into thinking that you want or need what he is selling. More times than not, you don't. That's not the point. The point is, my brother can scam with the best of them. And I got to watch him in action more times than I care to mention. Even when people realize later that he got the best of them through his famous grin, and wink from his baby face, they shrug their shoulders and say, "Oh well, he's such a cool guy." Nobody can get mad, or stay mad at my brother.

Every time I watched him, I would shake my head. I always wondered how these people could be fooled by him. The one thing I learned about my brother was, everything thing was a business deal. Even relationships. Friends or otherwise. He is always looking at what's in it for him. If you don't have something that he wants, there's a pretty good chance you won't be good friends with him. But he will keep you around to some degree, because in his mind, you might have something someday that he will want so ......

Anyhow, I learned all about scams from watching him. This is why it is hard to run one by me. This also leads me to the website "Absolute Write".

Now, when I first joined Goodreads back in the Spring of 2011, someone sent me a link to their site. I checked it out, reading through their forum before joining. I didn't join. My initial thought was, "This is proof the 'no child left behind' program was a complete and utter failure." There was something about these people that didn't add up. In the first place, all I saw was a bunch of gossip, and arguing. I got the feeling there was a lot of hate in these people and I wasn't about to go getting involved with a group like that.

But as the months passed, I soon forgot all about them until I got attacked by the Goodreads bullies. This is when I learned about STGRB. From there, they did a post about "Absolute Write" that soon explained why my internal alarm was ringing off the hook the first time I checked them out. It turns out that the site owner, MacCallister Stone, isn't who she appears to be. In fact, MacCallister Stone isn't even her real name. And when you're trying to decide if there is a scam in the works, I think someone who hides behind a fake name would be the first red flag that you might be dealing with a scam. The truth of the matter is that MacCallister Stone is really Lisa L. Spangenberg. (An author) 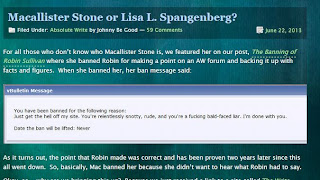 Not only that, but MacCallister, or Lisa, lists her address in Seattle, Washington. (A P.O. address) And furthermore, she really lives in California. Hhhmm, fake name? Fake address? Second red flag!

I also discovered the reason why she would probably go to such lengths to hide her true identity and address, because Lisa and her husband have been sued more times than a tabloid newspaper.

From what I have gathered, Lisa and her husband seem to hold seminars throughout the West coast. People pay to go to these seminars. I also learned that they provide "writing" services for a fee. This is when the light bulb turned on. How easy would it be to lure new and aspiring authors into their web? I mean, it's all about the money. And apparently, with all the lawsuits filed against them, most of which I understand, they lost and were found guilty of ripping people off, they do indeed fit the "scam" type.

This couple may also be largely responsible for a lot of the bullying going on over at Goodreads and Amazon Kindle Forum Boards. Here are a couple of screenshots of Lisa's GR profile, and her sock puppet, MacCallister Stone. (Provided by STGRB) Where you can clearly see some familiar bully names on their friends list. Take a look. 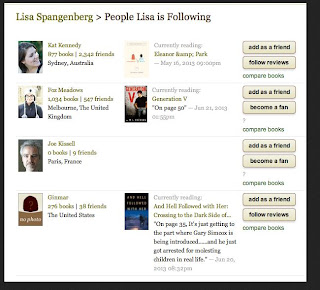 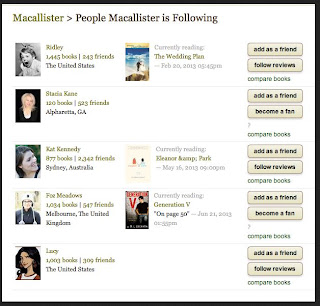 So I'm guessing at this point, with the members they have now, they all own several "sock puppets" each. It seems like more and more, STGRB continues to uncover these bullies and their sock puppets. It makes one wonder. I know it makes me wonder.

With all of this evidence and information, it would only be fair of me to warn any and all new, old or aspiring authors about this website. Of course, ultimately, the choice to do business with these people or even be associated with these people is completely up to each individual. However, if you do decide to get mixed up with the likes of these people, and find out later you've been scammed, don't say I didn't warn you.

My advice is, if you get involved with them, do not - under any circumstance - give them any money for anything. Period! And especially, do not send them any unpublished manuscripts to look at, review, or even edit. Double period!

I will go on record and say that I am not one hundred percent positive that "Absolute Write" is a scam, I have no concrete proof of it, but when the owner of the site lies about her real name, and address, and has been sued on multiple occasions, then all of the signs point to ---> Buyer Beware!

Trust me, no writer needs what "Absolute Write" has to offer. It is easy for people to prey on those who desperately dream of being a published writer, and have low self esteem.

To all Indie writers, I always recommend Bookbaby.com. And I advise to stay away from Goodreads if you can. I also highly suggest to tread carefully, and or stay away from the website that is called, "Absolute Write".


1) Owner has fake name and address

2) Owner has been sued multiple times

3) Their forums are nothing but gossip

I will give give "Absolute Write" credit for one thing though, they're very intelligent people. You see, they solved the mystery of my age. Using their version of commonsense and deductive reasoning, they were able to figure out that I am a withering and wilted old man. In a thread on their forum, they were talking about me. As everyone who has been following me knows, my age has not only been a bully obsession, but has baffled them for centuries. It's really all they can talk about. And because I openly admitted to reading and liking the book "Jonathon Livingston Seagull", they figured out how old I am. A tip of the my hat to you AW. Sherlock Holmes would be proud. You can see for yourself in this next screenshot by super sleuth herself, ViolettaVane.

Yes Violetta, you got me. I read "Jonathon Livingston Seagull". I am 60 years old. That is my confession. But wait! I have another confession to make. The truth is, I also read and liked "Journey To The Center Of The Earth", by my longtime and dear friend, Jules Verne. (I just always called him Dr. J.) And as everyone knows, that book was published in 1864. My second confession is that I lied about my first confession. The real truth is, I am 180 years old.

Okay, that's not true either. Now for my most shocking confession of the day. I lied about my second confession. You see, I also read and liked the Bible. Therefor I confess the truth that I am 10,000 years old.


Am I glad to get that off my chest!

I tell you what Violetta, just call yourself stupid.

(I told you the 'no child left behind' program didn't work)


I'm Carroll Bryant .... and this is The Looking Glass.